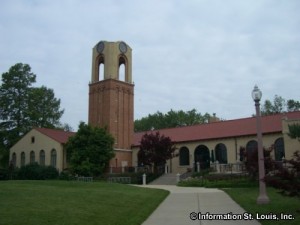 
The building used today as the Forest Park Visitor Center, called the Dennis and Judith Jones Visitor and Education Center, was built in 1892 by the Lindell Railway and was used as a streetcar pavilion. It has a Spanish architectural style and was designed by the architectural firm of Eames and Young who also designed the Cupples Stations warehouses (1892-1915) and the St Louis Masonic Temple (1926) in Downtown St Louis. In 1904 the tracks where removed from Forest Park for the World's Fair and the building was no longer needed by the railway. In 1914, it was remodeled and became a locker room and a golf pro shop.

The Visitor and Education Center was part of the Forever Forest Park renovations. It is staffed with trained volunteers that are able to give information about Forest Park and the St Louis area. In addition to the visitor's center, the center also includes a cafe, a locker and shower room, classrooms and meeting rooms, a banquet facility, and special exhibits.

Do you have a photo for Forest Park Visitor Center? Send it to us! Submit Your Photo