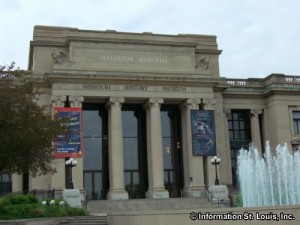 The Missouri History Museum is located in Forest Park in St. Louis, Missouri. The north entrance to the Museum was built in 1913 as the Jefferson Memorial with the proceeds from the 1904 World's Fair that was held in Forest Park. The Memorial was the first national memorial that was built for Thomas Jefferson and commemorated his role in the Louisiana Purchase. The building was built in the Beaux Arts style of architecture with a central rotunda and two wings and was designed by Issac Taylor. Karl Bitter's marble statue of Thomas Jefferson is located in the rotunda of the Memorial. In 2000 the Emerson Center was opened. This addition to the Museum expanded the amount of exhibit space and allowed for a restaurant and gift shop.

The Museum has several continuing exhibits that feature artifacts and artwork from the 1904 World's Fair, two galleries that display the past history of St. Louis and how it has effected the present and will effect the future of St. Louis, and a display that features the life of Charles A. Lindbergh and his 1927 solo-transatlantic flight with many personal artifacts as well as a replica of the Spirit of St. Louis airplane. Special exhibits change many times throughout the year. Special events such as concerts, theatre, and lectures are also held at the museum.

General admission to the museum is free, but some special exhibits charge admission fees. Children ages five and under are admitted free to all exhibits. The Museum is open daily with regular hours of 10am-5pm, except for Tuesday which has hours of 10am-8pm. The Museum is closed Thanksgiving and Christmas. On Tuesdays between 10am-8pm, residents of St. Louis City and County can receive a reduced or free admission to some of the Museum's special exhibitions.

Do you have a photo for Missouri History Museum? Send it to us! Submit Your Photo